A year of firsts continued for Johnson when he beat 10th-ranked Jo-Wilfried Tsonga on Thursday. The doubles bronze medalist won his maiden singles title at Nottingham in June, which he followed at Wimbledon with his first run to the fourth round of a Grand Slam tournament. Now making his ATP Masters 1000 quarter-final debut, Johnson will become the No. 1 American in the Emirates ATP Rankings on August 22. He has a chance to break into the Top 20 if he beats Dimitrov.

Through to the third ATP Masters 1000 quarter-final of his career, Tomic concludes play on Center Court against the top-seeded Murray. For the Aussie to reach his first ATP Masters 1000 semi-final, he must overcome an 0-16 record against Top 4 players and an 0-4 mark versus Murray (0-10 in sets). Buoyed by his second Wimbledon title and Olympic gold medal, Murray is on a career-long 20-match winning streak and 31-1 since falling to Djokovic in the ATP Masters 1000 Madrid final.

The only quarter-final pitting two seeded players will take place on Grandstand between World No. 6 Milos Raonic and World No. 9 Dominic Thiem. With rain affecting the first five days of the Western & Southern Open, Thiem received a rare reprieve from the weather when Gael Monfils withdrew due to a back injury. That gave Thiem a third-round walkover on Thursday, while the Wimbledon finalist Raonic needed three sets to defeat 102nd-ranked qualifier Yuichi Sugita.

• Tournament Note: Became 5th active player to reach 600 wins by beating Anderson in 3R. Enjoying a career-long 20-match win streak and owns a 31-1 record since falling to No. 1 Djokovic in ATP Masters 1000 final
• Captured 3rd Grand Slam title at Wimbledon (d. Tsonga in 5 sets, No. 9 Berdych and No. 7 Raonic)
• Became 1st British finalist at Roland Garros and 10th man to reach all 4 major finals in Open Era (l. to No. 1 Djokovic)
• Fell to 0-5 in Australian Open finals with 4th championship match loss to No. 1 Djokovic
• With J. Murray, became 1st brothers in Open Era to reach singles and doubles finals at same major (Australian Open)
• Successfully defended singles gold medal at Rio Olympics (d. del Potro 75 in 4th after 4h2m)
• Celebrated 29th birthday by beating No. 1 Djokovic for 12th ATP Masters 1000 title at Rome
• Beat No. 8 Berdych and No. 5 Nadal en route to ATP Masters 1000 Madrid final (l. to No. 1 Djokovic)
• Rallied from 76 30 down to defeat No. 9 Raonic and become 1st 5-time London/Queen’s Club champion (est. 1890)
• Extended Davis Cup win streak to 14 matches with 3 victories to lead Great Britain past Japan 3-1 in 1R

• Tournament Note: Reached QF or better in 10 of 12 tournaments in 2016, including 6 of 7 ATP Masters 1000 events
• Became 1st Canadian man and 2nd Canadian overall to reach major singles final at Wimbledon (l. to No. 2 Murray)
• En route to Wimbledon final, earned 1st win from 2 sets down to beat Goffin, then defeated No. 3 Federer in 5 sets
• Also fell to No. 2 Murray in London/Queen’s Club final after leading 76 30
• Won 1st 9 matches of season, highlighted by 8th career title at Brisbane (d. No. 3 Federer)
• Upset No. 4 Wawrinka in 5 sets en route to Australian Open SF (l. to No. 2 Murray in 5 sets)
• Played in 3rd ATP Masters 1000 final at Indian Wells (d. No. 7 Berdych, Monfils and Goffin; l. to No. 1 Djokovic)
• Reached ATP Masters 1000 QFs at Miami (l. to Kyrgios), Monte-Carlo (l. to No. 2 Murray), Madrid (l. to No. 1 Djokovic) and Toronto (l. to Monfils)
• Advanced to Roland Garros 4R (l. to Ramos-Viñolas)
• Withdrew from Delray Beach, Acapulco and Davis Cup 1R due to muscular tear sustained in Australian Open SF

Andy Murray scored a signature win at the Western & Southern Open on Wednesday, overcoming an early deficit to beat Kevin Anderson 6-3, 6-2 in the third round. The victory was the Brit’s 600th at the ATP World Tour level and stretched his career-best unbeaten streak to 20 matches.

Despite the final outcome, it was Anderson who made the better start. The South African, who upset Murray in four sets at the US Open last year, stepped into the court early and often and earned a break in the fifth game of the match. Undaunted, Murray broke back in the following game thanks to three unplayable forehand passes and was in control the rest of the way. He was especially sharp returning Anderson’s second serves, winning 16 of 24 points, and finished with four breaks of serve (4/9).

Murray joins Roger Federer, Rafael Nadal, Novak Djokovic and David Ferrer as the only active players with 600 wins. A decade ago, the Brit served notice of his potential by upending top seed Federer in the second round of the ATP World Tour Masters 1000 event.

Murray improved to 6-2 in his FedEx ATP Head2Head rivalry against Anderson and will face Bernard Tomic in the quarter-finals. Tomic has yet to beat Murray in four tour-level meetings.

Bernard Tomic is into the quarter-finals in Cincinnati after beating Kei Nishikori. Watch live tennis at tennistv.com.
Source: ATP News

Andy Murray‘s surge from 500 to 600 victories in just 116 matches for today’s milestone win, secured against Kevin Anderson at the Western & Southern Open in Cincinnati, is testament to his dedication, technical ability, agility and mind-body awareness.

The 24th player in ATP World Tour history to attain 600 match wins, is currently the in-form player with a 29-1 match record since 10 May, including a current career-best 20-match winning streak. He has captured four titles – the Internazionali BNL d’Italia, Aegon Championships, Wimbledon and Rio Olympics gold medal – from five finals (Roland Garros).

Murray’s reunion with Ivan Lendl in mid-June has provided a psychological boost; a mentor that not only knows how to win, but how to prepare for and negotiate tricky situations in big matches. Aided by his good friend Jamie Delgado, Murray’s rich form ensures that he looks set to challenge Novak Djokovic for year-end No. 1 in the Emirates ATP Rankings.

An increasingly popular champion worldwide, Murray continues to inspire and change the perception and status of tennis in Great Britain as one of its best known sports stars. Today, he has added to his legacy.

Murray is the fifth active player on the ATP World Tour – and the 24th player
overall in the Open Era – to join the 600 Match Wins Club. Here are the active
players to reach the milestone:

Top seeds Pierre-Hugues Herbert and Nicolas Mahut moved into the quarter-finals of the Western & Southern Open on Thursday in Cincinnati, denying the American wild card pairing of Ryan Harrison and Brian Baker, 6-4, 6-7(7), 10-2. The win booked the French duo a quarter-final showdown with Canadian sixth seeds Daniel Nestor and Vasek Pospisil.

Nestor and Pospisil rallied from a set down to defeat American wild cards Eric Butorac and Taylor Fritz, 6-7(2), 6-4, 10-5. Nestor is a five-time champion in Cincinnati and prevailed last year with Edouard Roger-Vasselin. Butorac is retiring from the ATP World Tour at the US Open.

Third seeds Jamie Murray and Bruno Soares also advanced to the quarter-finals. The British-Brazilian duo did not drop serve in defeating Pablo Cuevas and Marcel Granollers, 6-3, 6-4.

Next up for them is fifth seeds Jean-Julien Rojer and Horia Tecau, who edged past Dominic Inglot and Marcin Matkowski, 6-3, 4-6, 10-8. Inglot and Matkowski fought back from 2/7 to level the Match Tie-break at 7/7, but Rojer and Tecau hung on to prevail.

In first-round play on Thursday.  Bernard Tomic and Viktor Troicki advanced via walkover over Steve Johnson and Sam Querrey. The Australian-Serbian pairing will next face fourth seeds Ivan Dodi and Marcelo Melo. 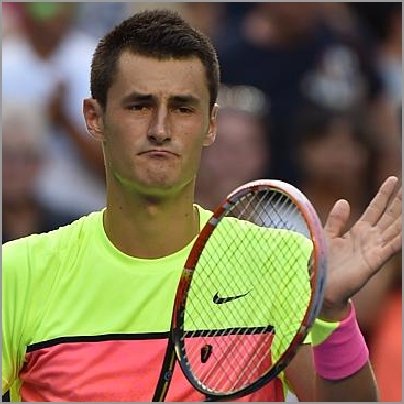 Bernard Tomic is through to his first Western & Southern Open quarter-final with his second upset in as many matches, taking down No. 5 seed Kei Nishikori on Thursday. The unseeded Australian prevailed against the top-ranked Japanese player 7-6(1), 7-6(5) having downed No. 11 seed David Goffin in the previous round.

The win levels the pair’s FedEx ATP Head2Head record at 2-2 after Tomic had beaten Nishikori in the quarter-finals on home turf in Brisbane to start the season. He will next meet either top seed Andy Murray or South Africa’s Kevin Anderson for a place in the semi-finals.

Tomic sent down 10 aces and claimed 76 per cent of first-serve points in the near two-hour display. Nishikori was unable to carry the momentum of a break at 3-2 in the opening set, letting two set points slip serving for it at 5-4. Tomic, too, had a set point at 6-5 on the No. 5 seed’s serve before the tie-break was forced. The Aussie made good on his second chance, reeling off the last five points of the tie-break.

Again in the second set Tomic was forced to hang tough. Serving to stay in the set at 4-5, he saved three set points to level and would close out the match on his second match point in the tie-break.

Just Off the Wires…